From New York Times bestselling author Kristen Proby, comes the next sexy and captivating standalone title in the Boudreaux Series, EASY MAGIC. Take a trip to the Big Easy and fall in love with Beau and Mallory’s story in this passionate and magical contemporary romance. Grab your copy today!

As the co-CEO of Bayou Enterprises, and the eldest of the Boudreaux clan, Beau is the epitome of these. Now that his baby sister Gabby is happily settled down, Beau has moved into the company loft in the heart of the French Quarter to be closer to his office while his own home is built. He doesn’t have time for anything but the family he adores and the company that drives him.

If only the bewitching owner of the herb shop downstairs from Beau’s loft wasn’t so damn tempting.

Mallory Adams is living the life. The good life. The best life for her. After years of hiding who she is, and the gifts she’s been cursed with, Mallory opened her little shop in the French Quarter, offering herbs and lotions for anything from soothing a sunburn to chasing those pesky ghosts New Orleans is known for out of a client’s home. Some call her eccentric, and some say she’s simply odd, and that’s okay with her. She is a bit odd, but in her experience, all of the best people are.

When an old pipe bursts in the loft above her store, flooding her storeroom, Mallory comes face to face with Beau Boudreaux, and she doesn’t need the clairvoyant abilities that have been passed down through generations to know that she’ll never be the same. Beau is her exact opposite; serious, straitlaced. He wears suits for Pete’s sake and probably wouldn’t know the difference between arnica and flaxseed if his life depended on it. But when he touches her, the electricity is through the roof and she’s smart enough to know that a chemistry like theirs doesn’t happen every day.

Can two people so very different possibly find their way to happily ever after?

“I’ve always had a knack for knowing what people need,” she says softly, as if she’s choosing her words very carefully. I don’t know why that bothers me. I want her to speak her mind, to not have to censor what she says.

But this is a good start.

“Maybe someone has headaches, or their feet hurt. I have essential oils and herbs that can help with those things.”

“My grandmother taught me all about alternative medicine from the time I was a child. She wasn’t crazy with it,” she says quickly, “she still believed in western medicine as well, but why take a pain reliever full of chemicals if you can just put a drop of oil on the back of your neck to get the same result?”

She shrugs and reaches for the dessert, smiles when she opens the box, and digs in with enthusiasm.

“I thought it would be fun to open a store full of those things,” she continues. “I wanted the bottles to be pretty, and everything to be tied with a bow. I wanted a place where people enjoyed coming in, even if only to browse. It smells good, the energy is calming.”

And I realize that that’s exactly how I feel whenever I’ve been in her store.

“Thank you.” Her smile is huge and genuine. “That’s really the best compliment I could ever get.”

“Really?” I cock a brow and watch her lashes flutter. “I’d also say you’re stunning. I want to bury my fingers in that amazing curly hair of yours.”

There must be something in the food that’s making me speak so freely. But Mallory seems to bring out my flirty side.

I’d forgotten that I had a flirty side.

Her smile slips just a bit, and her cheeks flush, and I know she’d look just like that when I’m buried balls deep inside her.

“But not what you want to hear.”

“Well, don’t get me wrong, every woman wants to be told she’s pretty.”

“I didn’t say pretty,” I reply and lean in, resting my elbows on her desk. “’Pretty’ is too dull of a word to describe you.”

“You’re an interesting man,” she says, tilting her head to the side and studying my face with narrowed violet eyes. “You just say whatever you’re feeling.”

“Not always,” I reach out to tuck her hair behind her ear and she stiffens. I pause, keeping my eyes pinned to hers before I slowly brush just the pads of my fingertips over the outline of her ear, tucking that soft curly hair, then lowering my hand back to the desk. “But I see no reason to not be honest with you.”

“I opened this shop because I love it,” she says, her voice still soft but firm. She’s not weak in any way, and that pulls at me like a siren’s song. “I want to help people if I can, even if it’s just to moisturize their hands. And I like this building.”

“There are other streets with more foot traffic.”

“I’m glad you do.” I nod and without giving it much thought, reach out to pull my fingertips over her hand. My eyes are watching hers as I do, and I can see the hesitation just before I touch her, and then the relief when my skin rests on hers.

“That’s all there is about the store.”

“Tell me about you.”

She pulls her hand out from under mine and sits back in her chair. “I think you’d better go, before I tell you more than I want to.”

“Good.” She nods once and begins loading the empty boxes in the trash. “I’m in favor of being honest, and in that same spirit, I’m exhausted, Beau.”

But I’m not ready to say goodbye to her yet. I’m afraid that we’ll go our separate ways, and I won’t see her again.

“What are you thinking?” she asks.

“That I want to see you again.”

“You live upstairs from my shop,” she reminds me. “I don’t see how we could avoid it.”

“We avoided it for a damn long time,” I say and stand, shoving my hands in my pockets. “But I won’t make that mistake again.”

And don’t forget to grab the first four books in

New York Times and USA Today Bestselling author Kristen Proby is the author of the bestselling With Me In Seattle and Love Under the Big Sky series. She has a passion for a good love story and strong, humorous characters with a strong sense of loyalty and family. Her men are the alpha type; fiercely protective and a bit bossy, and her ladies are fun, strong, and not afraid to stand up for themselves.

Kristen lives in Montana, where she enjoys coffee, chocolate and sunshine. And naps.

by Jennifer Probst is now LIVE!

This is a new nonfiction book aimed at writers of romance and women’s fiction, intermingling writing exercises, strategies and tips with personal essays on the writing experience from one of the star romance writers today. 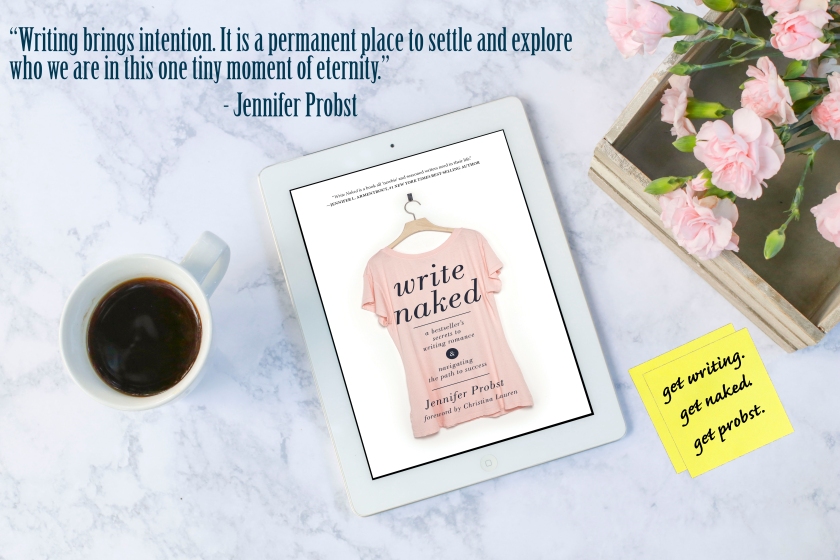 Learn how to transform your passion for writing into a career. New York Times best-selling author Jennifer Probst reveals her pathway to success, from struggling as a new writer to signing a seven-figure deal. Write Naked intermingles personal essays on craft with down-to-earth advice on writing romance in the digital age. Probst will teach you how to:
• Commit to your current work-in-progress, get focused, and complete it on schedule
• Reveal raw emotions and thoughts on the page to hook your readers
• Assemble a street team to promote and celebrate your books
• Overcome writer’s block with ease
• Develop themes that tie together your books and series
• Write the most difficult elements of romance–including sex scenes–with skill and style
Regardless of the genre, every novelist faces a difficult task. Creating authentic characters and an engaging plot are challenging enough. But attempting to break into the hotter-than-ever romance genre, which is constantly flooded with new titles and fresh faces? It can feel impossible. This is where Probst’s Write Naked comes in. To survive–and thrive–you need the help and wisdom of an expert.

Written in Probst’s unmistakable and honest voice, Write Naked is filled with the lessons and craft advice every writer needs in order to carve out a rewarding career. 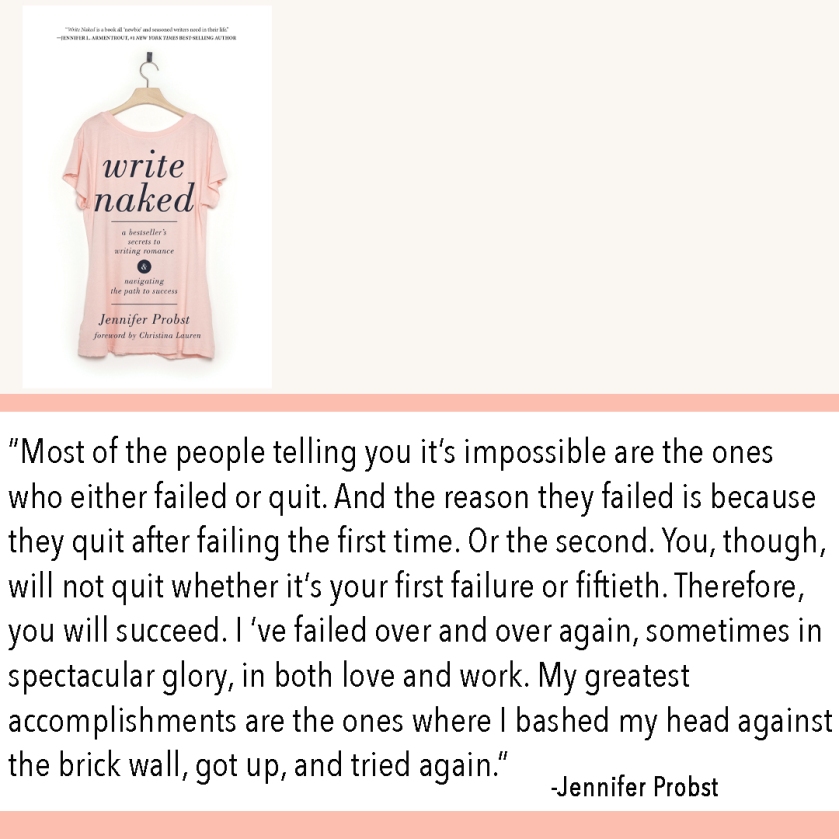 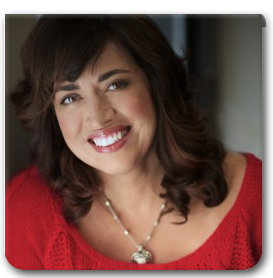 Jennifer Probst wrote her first book at twelve years old. She bound it in a folder, read it to her classmates, and hasn’t stopped writing since. She took a short hiatus to get married, get pregnant, buy a house, get pregnant again, pursue a master’s in English Literature, and rescue two shelter dogs. Now she is writing again.